ZOS for Android: Adding a Tutorial

Zombie Outbreak Simulator (ZOS) for Android was first released on Friday the 7th of November 2014.

By the end of November 2014 it had been downloaded by 45,000 people. While a lot of people loved it, even more people hated it, resulting in an average rating of only 2.9 stars. This was very disappointing in comparison with ZOS on iOS, which has an average rating of 4.5 stars.

There was a lot of negative feedback from the pricing and in-app purchases (I’ll be writing up more on that in another blog post some time). However going through the reviews, there was another common theme: some people didn’t know what to do. 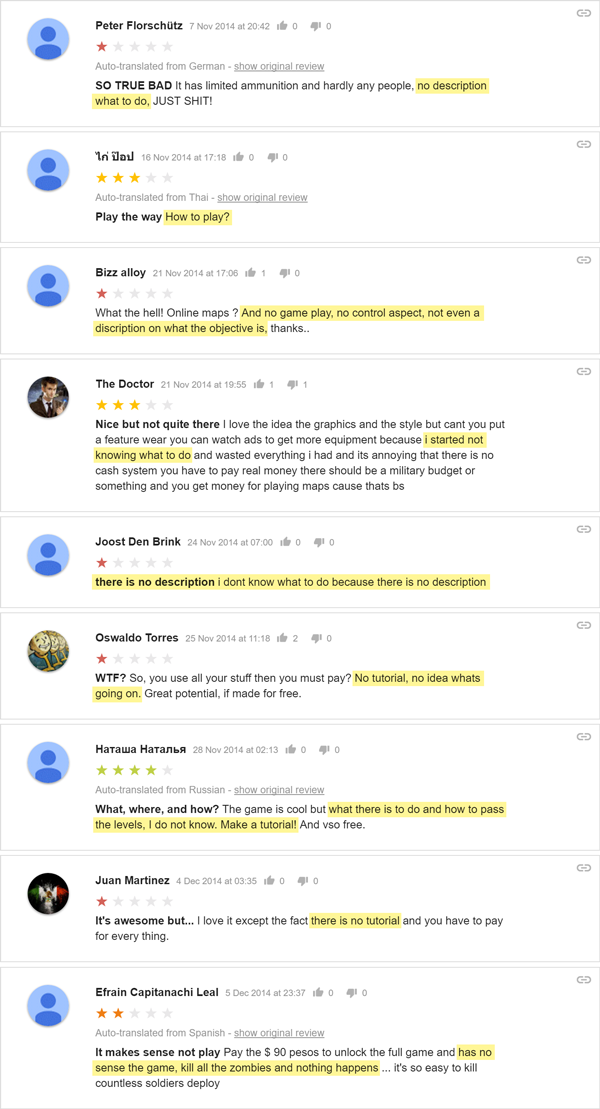 ZOS is a bit of an unusual game – it’s not really a game, more of a ‘toy’. There’s no real objective, instead you tinker with settings and then watch what happens. How you play is up to you. I mention this in the description for the app on the Google Play store, in the very first sentence:

Zombie Outbreak Simulator is a sandbox app where you can customize your own zombie outbreak.

And a bit further down:

However, I know many people don’t read the app description, or even if they did, it’s not super clear that the player needs to make up their own game.

In hindsight, I should have included a tutorial in the game to explain what to do. So why didn’t I?

Jay and I never set out to develop ZOS. Actually, way back in 2009 we started developing the web game Class 3 Outbreak (C3O). In the original C3O, the idea was to control a small group of police officers against a background of a zombie outbreak. Initially the goal was to squash some small outbreaks, then to rescue some scientists, then to rescue a helicopter pilot and then evacuate.

While we were developing C3O, before even adding the police I started with the basic background zombie simulation – civs walking around, zombies chasing them, civs shooting back, civs getting infected, etc. Before the actual game went in, we thought this was pretty fun to watch :)

So when we were about ready to release C3O, we decided to make a cut-down version of the game containing just the simulation. We came up with the imaginative title of Zombie Outbreak Simulator, and we planned to release this first as a ‘teaser’ for the full game.

Then in 2012 we released ZOS for iOS. Again, there was only one map, and the only thing you could do was change the infection settings. Again we put in a prompt to make the settings obvious. 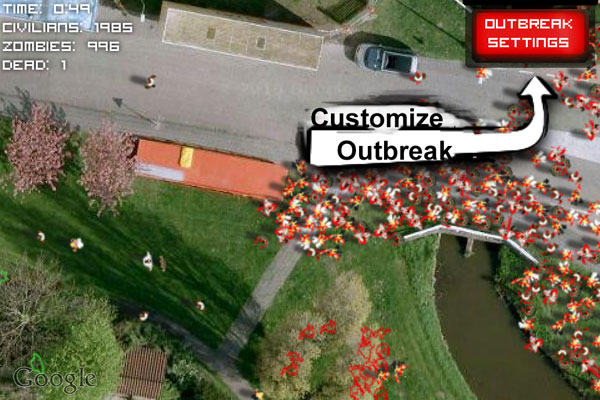 During 2012 to 2013, ZOS for iOS gradually expanded. We increased the number of online maps to 10, added bombs, dropped to 5 offline maps, then increased up to 10 online plus 5 offline maps. 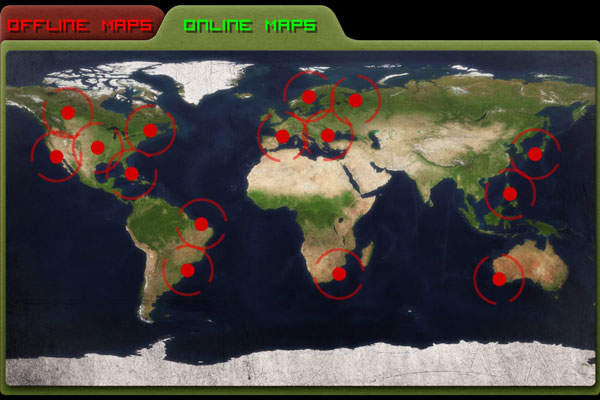 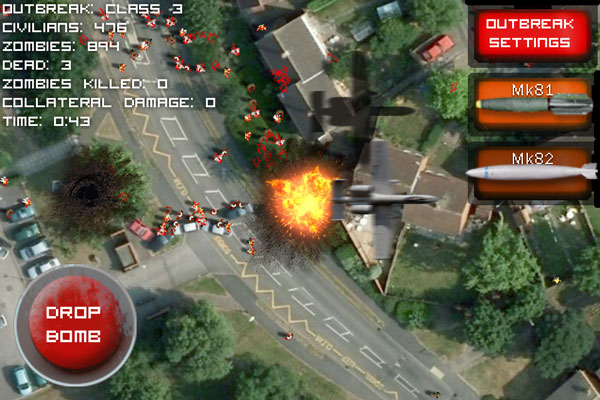 Then in 2014 we released ZOS for Android, which expanded even more. As well as the 10 online plus 5 offline maps, there were now 2,500 player maps to choose from. And in addition to bombs, players could also send in soldiers and helicopters. 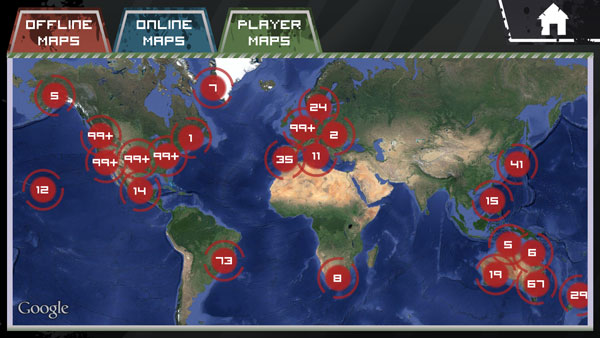 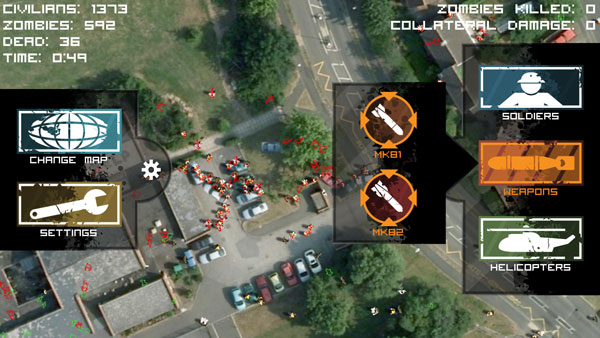 By this point there was a confusing array of features to choose from, with no guidance on what to do. This time around I didn’t even include an arrow to point out where the infection settings were.

So why didn’t I include any tutorials or even prompts?

One reason is that I was keen to get ZOS for Android released. I was supposed to release it in May 2014, but it didn’t end up being released until November 2014. Even if I’d thought of it, I probably would have cut it, to get the game released as soon as possible.

But the main reason is that I was too close to the project. I’d been there since the project began, so I knew that the core gameplay was about watching a simulation and adjusting the parameters. I knew that choosing a map was just about what backdrop the simulation was running against. And I knew that the bombs, solders and helicopters were just a bit of added entertainment. However, most players who downloaded and installed the game wouldn’t have known any of this.

So, in December 2014 I started work on adding a tutorial. The first time someone loads the game, instead of all the map options, there’s only a single Play button. This takes the player straight into the default map, and then provides a guided tour through each of the game’s basic features. 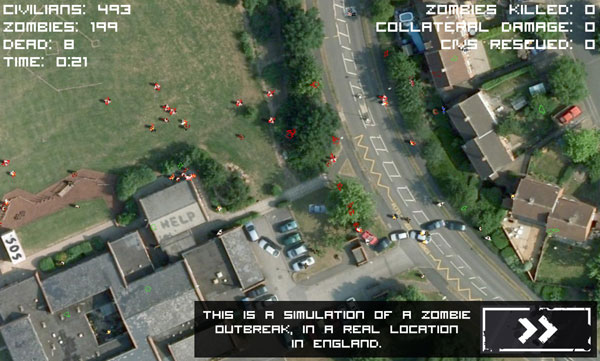 The tutorial update was released on the 26th of December 2014. Coming off the low average rating of 2.9 stars from November, ratings increased to an average of 3.6 stars during January to April 2015, and have maintained roughly that level ever since.

The takeaway? When developing a game, it’s a good idea to step back from it every now and then, and imagine how it will look to someone who has never seen it before. Does the game still make sense? If not, try to make it more obvious.

I’m putting this away in my “things I did wrong” file, along with all my other mistakes. Now off to find something else to mess up! :)