Way back in June I wrote a post to see if anyone would be interested in helping me build an Android version of Zombie Outbreak Simulator, by joining me in applying for funding from Screen Australia’s new Games Production Fund. For those of you interested in seeing ZOS come to Android, I thought I’d post an update!

ZOS on iOS has earned about $30k. Some apps make more on iOS and some make more on Android, eg according to this article “The Simpsons: Tapped Out” earned about 79% on iOS, whereas “Blood Brothers” by Mobage earned 61% on Android. My “random guess” is that ZOS might earn $10k to $20k on Android, but the only way to know is to build it and find out. So I figured if I could put a proposal to Screen Australia for $10k or less, they might accept it.

My preference was to spend that $10k on hiring other people to build the Android version of the game. Any income from sales of the game on Android would then be put back into building future updates to ZOS and C3O on the web, iOS and Android. So I put out the call for three people:

I didn’t get much response from possible programmers – only one person contacted me, and his estimate alone was over the total budget of $10k! His estimate was probably quite sensible though – as I’ve described before, although ZOS has made some money, my total profit for over 2700 hours of work is approximately zero. So my plan B was for me to do the programming, most likely at a loss (basically for whatever was left of the $10k budget after however much the artist and marketer wanted).

I got responses from a small number of artists – thanks everyone who got in contact with me! Many thanks to James Filippone who was willing to partner with me in putting in an application to Screen Australia! Screen Australia’s guidelines require teams to have at least 2 people who have worked on at least 2 games each. You can see some of James’ work here and here.

For the marketing side, I got in contact with Chris Wright from Surprise Attack (an Australian games marketing agency). I met Chris when he came over to Perth last year to be part of an indie games marketing course put on by Let’s Make Games. Chris gave me some tips, and was also happy to help me out with some further strategic advice if I was successful with getting funding. Thanks Chris!

Also thanks to Mike Cowap from Screen Australia, who came over to Perth back in July (about a week before the funding deadline), to talk about the funding program. I was able to get a one-on-one meeting with Mike to discuss my ideas for ZOS on Android.

By the time I’d talked about all of the above with James, Chris and Mike, there was a week left until the first round funding deadline (the 12th of July). I figured I might as well give it a try! :)

Here’s all of the documents which I prepared for the application, laid out on my table:

That’s 14 documents, each ranging in length from 1 to 14 pages, and each printed out 3 times. That makes over 170 sheets of paper! Also 3 USB drives, containing electronic copies of the documents, plus two videos that I had to prepare (each about 2.5 minutes in length).

And here’s that enormous wad of paper, at the post office getting ready to be posted off to Screen Australia, only 2 days before the deadline! 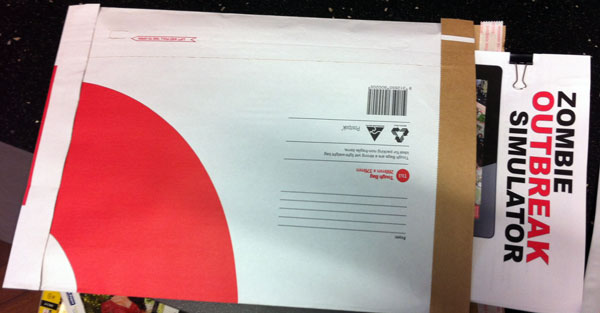 The funding deadline was the 12th of July. Screen Australia’s guidelines say that they will take around 10 weeks to assess the applications and announce their decision. It’s now been about 7 weeks, so hopefully I will find out by the end of September? I’m crossing my fingers! :D