For the last few days I’ve been trying out the new Google Maps SDK for iOS, to see if I can use it to bring Google Maps back to Zombie Outbreak Simulator for iOS. The SDK isn’t yet fully available to all developers as Google are handing out keys progressively, presumably so they can test it to make sure it works okay before going for a full release. I applied for access and Google sent me a key a few days later – thanks Google! :)

I was able to get the new maps SDK into iZOS without too much trouble, but unfortunately it doesn’t quite do what iZOS needs. I can get the zombies and civs to draw okay over the map: 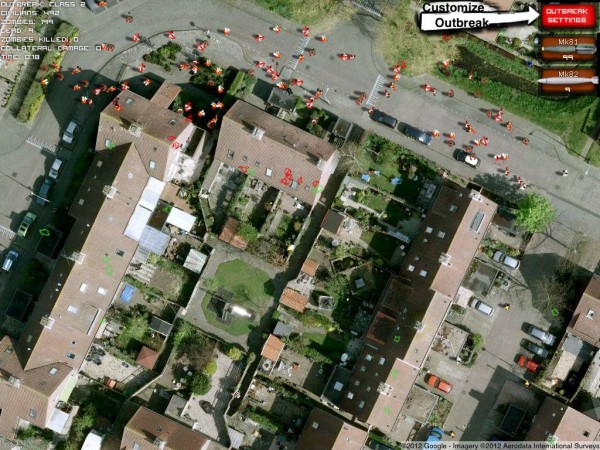 This is Google’s first release of their new Google Maps SDK for iOS, so I’m hoping that they’ll update it in the future to add support for overlays, which should make it possible to properly synchronize content with the map.

Otherwise, before Google announced their new SDK, I had been planning to try to get iZOS to work by turning it into a hybrid native / web app (since it is possible to embed the Google Maps JavaScript API in a web browser in an iOS app). So if Google don’t add overlays to their iOS SDK, I still have that option to fall back on. The performance of hybrid apps is not great, and there’s a lot of technical issues with integrating web content with native content, and so the Google Maps SDK for iOS would have been a better option. But if hybrid is my only option, then I’ll give it a shot :)