Jay and I released the original Zombie Outbreak Simulator (ZOS) for the web way back in November 2009. It featured a simulation of thousands of zombies chasing down thousands of civs on a Google Map of a square kilometre of Washington DC. 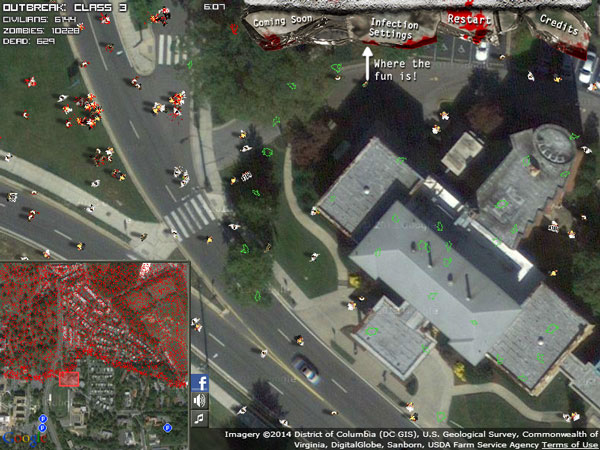 A few days after release it “went viral”, with over 200,000 hits over the next 2 days. Since then it has gone on to be played over 1.3 million times. This initial release has been followed by 8 years of zombie games on Google Maps, with two releases of Class 3 Outbreak (C3O) for the web and releases of ZOS on iOS and Android, with millions of players and downloads.

There are well over 2 million apps on each of the Apple App Store and Google Play Store, with about 25% of them being games. Who knows how many other web or PC games there are. But basically, there’s a bajillion other games out there which people could be playing. 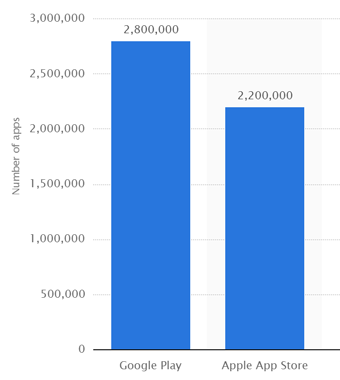 So why are people playing ZOS/C3O? Why did the original ZOS for the web go viral? Why did the popularity of ZOS for Android go up by itself even after I stopped promoting it? I think it’s at least partly because the game is built on Google Maps. This makes it stand out against all of the other games out there – it makes it novel enough that players will give it a second look. Half the battle of marketing a game is to get someone to click the link or tap the install button, to give the game a chance. Once they’ve done that, then the game finally has its opportunity to try to be entertaining. So, this is why I think Google Maps is The Best Thing. Without that ZOS and C3O probably would have been “just another zombie game” and probably not as successful. So I’m glad Jay had the crazy idea of building the game on Google Maps way back in 2009.

However, there are also downsides to building a game on Google Maps…

Google Maps is designed for, well… mapping, not game development :) Integrating a game with Google Maps has been more technically difficult than just building a game from scratch, requiring extra work on every platform (web, iOS and Android), and even a time when we had to take Google Maps out (when Apple removed Google Maps from iOS back in 2012). There are also other technical restrictions (eg I could never port the game to consoles), as well as licence restrictions (eg to make a version of the game for PC I’d have to pay Google a fee, which I think is around $10k/year).

I’ve overcome all of these issues so far by working around them. I’ve figured out weird technical ways to make the game work on all platforms. And I charge for the game on iOS/Android (where Google Maps allows me to), which covers the cost of making the web version free (since Google Maps doesn’t allow me to charge there, unless I pay Google a fee).

The editor for C3O allows players to create their own zombie outbreak anywhere in the world by drawing an overlay over the Google Map – red for walls, green for trees, yellow for cars, etc. The game uses this info to run the simulation. 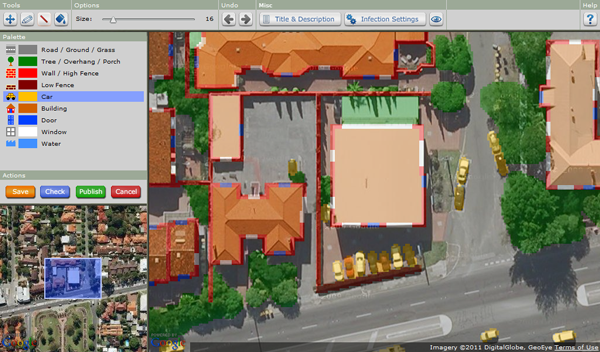 The player’s map overlay works great when the player first creates their map. However, the most difficult aspect of using Google Maps as the background for a game, is that the world keeps changing! And so of course Google Maps keeps updating their photos every year or two. And so over time, the maps get out of sync.

When I was working on the ZOS for iOS update released in October 2016, I started with the code for ZOS for Android. The 15 featured online maps (which use Google Maps) were the ones I’d originally built into ZOS for Android when it was released in November 2014. One of the final tasks I did before releasing the ZOS for iOS update was to check over the 15 featured maps. Of those 15, only 5 of them were still correct :( 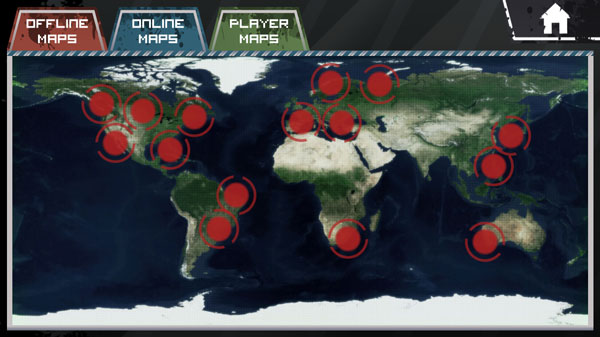 For some of the maps, there were only a few minor changes – like cars in different positions, trees that had grown bigger, a few new buildings. These kind of changes are to be expected and weren’t too bad – I could fix them up with a quick edit of the map.

In some cases the entire map had shifted by a small amount. Did the Statue of Liberty drift about 10 metres north-east in the last couple of years? For a couple of these maps I erased everything and recreated them from scratch, for others I just replaced them with completely different maps. 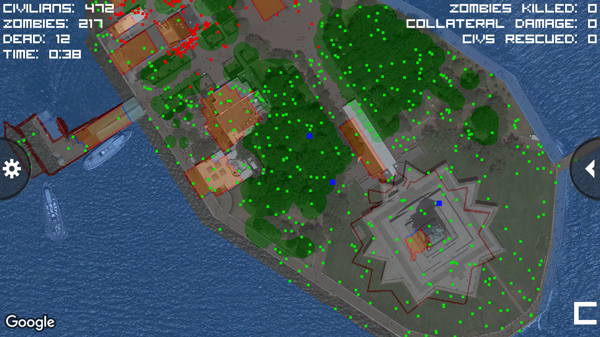 The most disappointing map change was where Google had replaced the images with ones which were newer, but which looked worse. There used to be this cool map in Brazil, which was even featured in the app store screenshots. 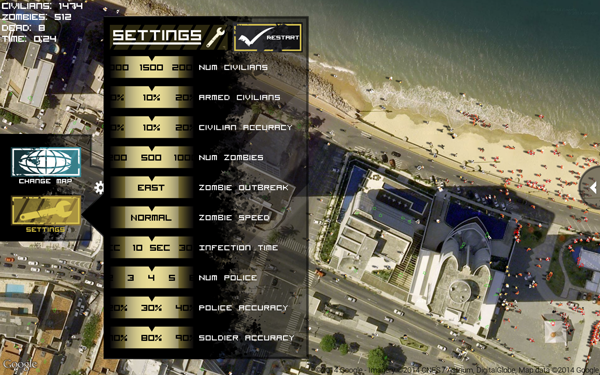 But this map now looks like this. Not only are the buildings all mixed up, but the image quality is really bad. 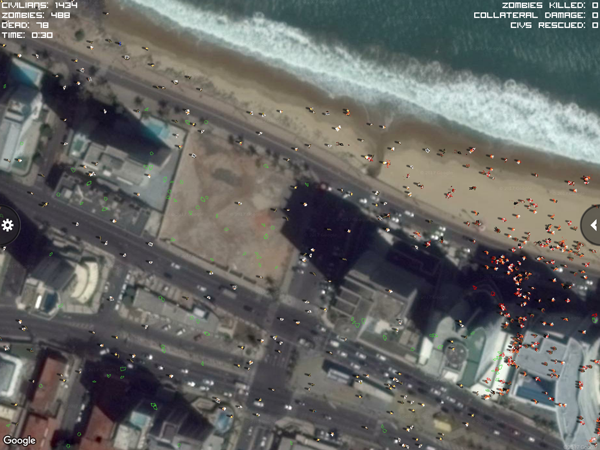 Both of the 2014 Brazilian maps were like this, and also the one in the Philippines. Unfortunately these images just looked too bad to be playable, and so I had to get rid of them and replace them with completely new maps.

As I was writing up this blog post I did a quick check over the 15 online maps – and 5 of them have already updated since October last year! Looks like I need to do another round of fixes again…

Needing to keep checking and editing and updating the game to keep it working well and looking good is what makes working with Google Maps also The Worst Thing! :|

Google Maps always shows the latest satellite photos, which makes sense for mapping. However for C3O/ZOS, I’d much rather stick with the old version of the photos which matches what the original player edited. Google Earth provides a way to see and scroll through the old imagery, but unfortunately the Android, iOS and JavaScript APIs that I use don’t have anything like that. There’s actually a feature request on the Google Maps issue tracker to add support for historical imagery, however I’m not expecting that to be added any time soon :)