ZOS for Android: Making it More Free to Play

Zombie Outbreak Simulator (ZOS) for Android was released in November 2014. Since then it’s been downloaded by over 550,000 people.

Although the tutorial update that I released at the end of December 2014 helped improve the ratings (from about 2.9 stars to about 3.5 stars), there’s still a high percentage of 1-star ratings coming in every month.

The vast majority of the negative feedback received now is about the in-app purchases and pricing.

With most free-to-play games there’s some kind of progression. Through playing the game you earn something, like coins, gems, points, whatever. In the game you can spend these credits to keep progressing with the game. You can keep playing for free more-or-less forever, although it gets harder. Or, if you want to you can spend real money on an in-app purchase to buy something extra, like more credits or extra items, which help you in the game.

The problem with ZOS is that it’s not like this. There’s no progression of game play, instead it’s more of a toy that you can tinker with and see what happens. It’s up to you whether you supercharge the zombies to make them win, or the humans to make them win. You can choose whether to use the bombs, soldiers and helicopters to help the humans, or not. There’s no way to reward you for winning (you can’t win!), and there’s no progression between games. So the usual free-to-play approach for in-app purchases doesn’t work.

So, the approach I used was more of a free trial. There is limited functionality available for free – a couple of maps, limited settings, a couple of bombs / soldiers / helicopters per game. The idea is that this is enough to get a feel for what the game is like. If you like the game, then you can pay to unlock the full game (or just parts of it). Separate features cost from 99c, up to $4.99 for everything. I think this is better than entirely paid-up-front, because this gives you a chance to try it out first.

Unfortunately, a lot of people hate this… 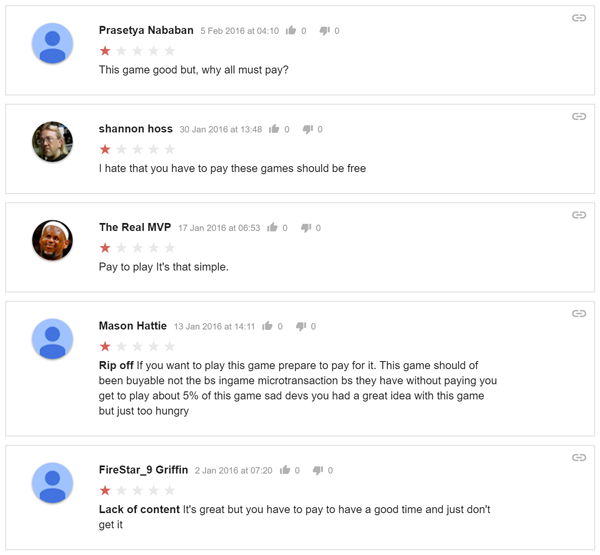 So, for some time I had been thinking about how to let people keep playing for free, rather than hit the limit of the free features and get annoyed. The most obvious choice was some kind of rewarded video – temporarily unlocking part of the game by watching an ad. People could then either keep playing for free by watching ads, or choose to pay to upgrade if they got tired of the ads.

Coincidentally, in early January of this year I was contacted by AppGrade, offering their platform for rewarded videos. After some discussions with them I decided to give it a try.

On the 18th of February I released an update which added the ability to watch a video to get extra bombs, soldiers and helicopters (10 of each), in addition to the existing options to purchase. I’d decided to trial video ads with just the bombs / soldiers / helicopters first, to see how it went. That way if it didn’t work out, I wouldn’t have wasted too much effort on it. 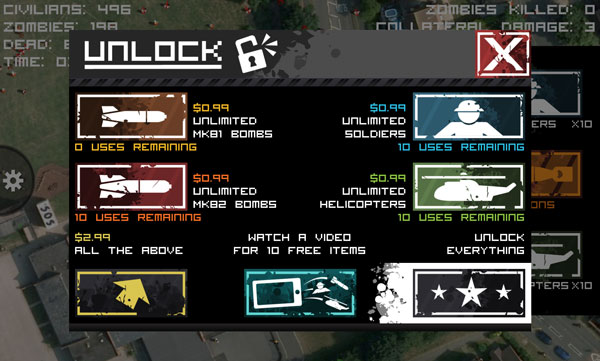 The response to the video ads has been good. Soon after release there was a dip in revenue from purchases. I suspected this might happen, as people who previously felt ‘forced’ into buying an upgrade, might have decided to watch ads instead. However the revenue soon picked back up again, back to around its previous levels. And the ads themselves have brought in some extra revenue on top of that. (This chart is in USD).

One statistic that I thought was most interesting was that there was an immediate increase in the amount of time people played the game per session. Before the update sessions averaged around 7 to 8 minutes, after they averaged around 8 to 10 minutes. For reference I’ve coloured the Sundays in red (there’s always a dip in session time every Monday).

Unfortunately, the update didn’t do anything to improve the ratings :|

However, I still think it’s been a worthwhile update, and so I’m planning on making more features of ZOS for Android free by unlocking them with rewarded videos.

At the moment I’m working on an update to be able to unlock the settings (in parallel with working on the iOS update). And then after that I plan to add the ability to unlock the online and offline maps (the player maps will stay as a paid feature).