One of the joys of indie game development is… how little time you actually spend developing games!

In addition to the obvious parts of game development (like game design, programming, art, sound, music, etc), there are so many other things to do. ‘Fun’ things like accounting, marketing, running websites, moderating spam, and so on.

One of these things is the Class 3 Outbreak Forum. Jay first set it up about a week or two after we first released the original Zombie Outbreak Simulator, way back in November 2009. But maintaining forum software is not really something Jay or I felt like spending our time doing. I know enough about sysadmin to be dangerous – I first tinkered with Linux around 1997, back when you had to recompile the kernel to add sound support, and by 1999 I was running 4 Linux servers at home. But for Binary Space I mostly concentrated on programming, and let Jay fill the roles of art, sound, music, design, and “everything else”. This mostly left Jay doing the cursing whenever he had to try to set something up on a server, and it inevitably went wrong :) So mostly, we left good enough alone. Which meant we were running a version of phpBB which was about 3 years old.

Back when we were getting ready to release the original ZOS and Class 3 Outbreak, Jay suggested we rent an expensive-ish (approx $150 per month) dedicated server from SoftLayer, instead of cheap shared hosting, “just in case we got Dugg“. We did get on the front page of Digg – and the server still crashed anyway, but SoftLayer were great in helping us through it. But after that initial burst of traffic, and after the additional spike of traffic when we released the original Class 3 Outbreak in April 2010, our traffic dropped to levels where it wasn’t worth continuing to spend so much on hosting the server.

So, we decided to move class3outbreak.com onto the cheaper VPS server which Jay already had for his other business Hyperfocal Design, with Binary Space splitting the cost with Hyperfocal. This included moving the forum.

Fast forward to today, and the forum was still running on Jay’s server… which is a bit awkward now that Jay has left Binary Space. So, I needed to move the forum to some other server.

I could have found another host, set up phpBB on it myself, and then moved the forum to it. But then I’d have another server to look after. I’d rather spend my time making games!

So instead I’ve decided to go with Forumatic. They provide fully managed phpBB hosting – so they set up the servers, install the updates, and make sure it’s running properly. Forumatic is run by a couple of the core phpBB developers, so I presume they know what they are doing – far more than me :) This way I can just use the forum, and I’m free to spend more time on game dev.

One minor downside of Forumatic is that they only offer a limited choice of five styles. They are currently running a custom pre-release version of phpBB, which makes it time consuming for them to add more styles. Hopefully they’ll be able to offer more styles in the future. 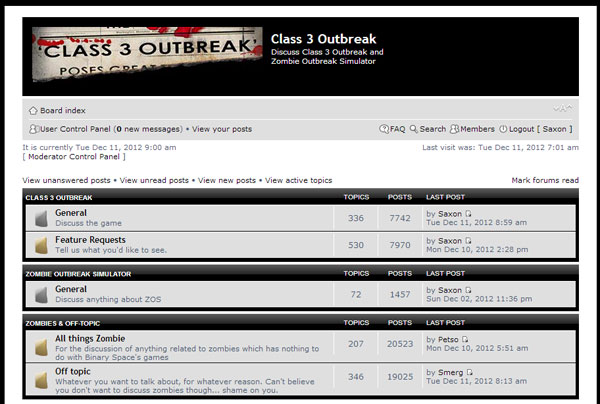 I tried a few of the styles offered by Forumatic, but settled on the redsilver3 style: 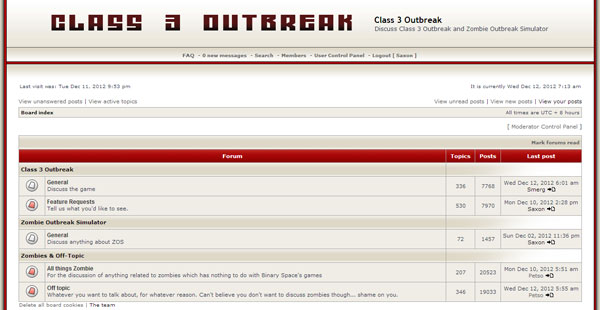 Hopefully the transition isn’t too traumatic :)

Anyway, the new forum is now live – see you in there!

Back to game dev now! Actually, I think I have a bit of accounting to do first…