As of the end of May, our games Zombie Outbreak Simulator (ZOS) and Class 3 Outbreak (C3O) have now been played a total of 1 million times! 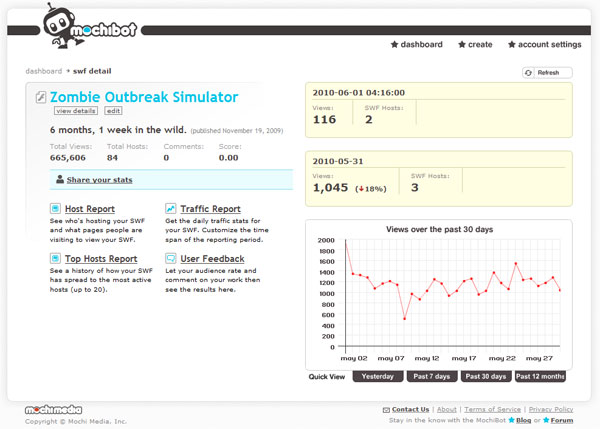 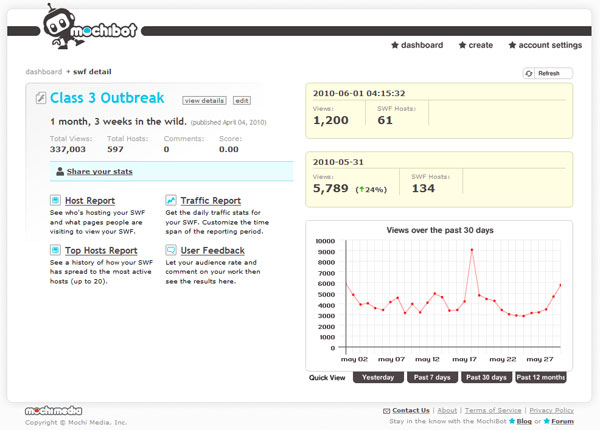 It’s been about 4 months since I posted that ZOS reached half a million plays. Since that time ZOS has settled at around 1000 plays per day.

Like ZOS, C3O has now been played by most of the world (yellow means no plays from that country). 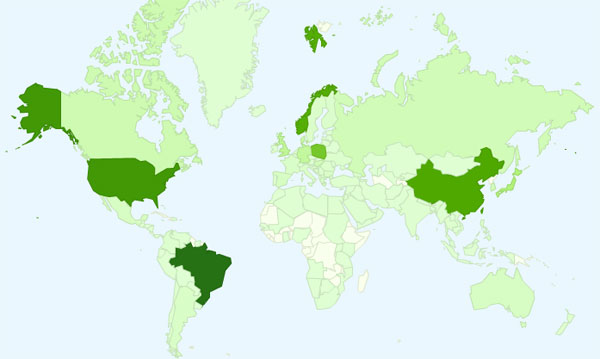 Building our game on top of Google Maps requires us to lock our game to specific websites. That is why ZOS only appeared on our site and later Kongregate. However the standard approach for Flash games is for them to spread virally over numerous portals.

Therefore, our plan for C3O included buying the imagery for Leicester and embedding it directly into the game. This allows that map to be played from any website, and C3O then links back to our site to play the original Google Maps based Washington map. So far C3O has spread to just under 600 websites. The large numbers for countries like Brazil, Norway and Poland have been due to the game featuring on a few large gaming sites in those countries. 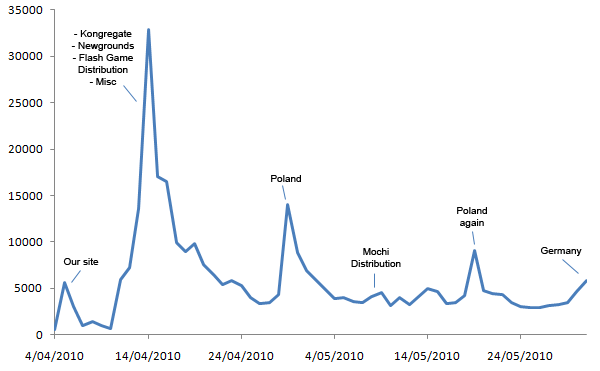 We initially released the game on our site only, and promoted it on our forum, Facebook page, and mailing list, to see whether we would get a similar response to ZOS. Not much happened :)

So a week later we created a new version for general distribution to portals. We uploaded it to Kongregate, Newgrounds, Flash Game Distribution, and Jay submitted our site to numerous other websites, all of which produced a good initial spike of traffic. Since then C3O has settled at around 4000 plays per day, with a few occasional spikes.

A few weeks ago we also submitted the site to Mochi Distribution. This seemed to have very little effect on the traffic, although it has had an obvious effect on the number of sites at which C3O is played each day:

The 335,000 “plays” are actually counting the number of times which the game has been loaded. We also track the number of games played within a single session:

Who are all these people who don’t like the look of the main menu enough to even play a single game? :)

At first glance these numbers seem pretty bad. However around 50% of our plays are from repeat visitors to our game. So a large percentage of those single plays (and maybe even some of the zero plays) are actually people who like the game enough to come back again another day.

Overall we’re quite happy with the reception to C3O so far, and we’re now busy working on even more features to make the next version of the game even better!